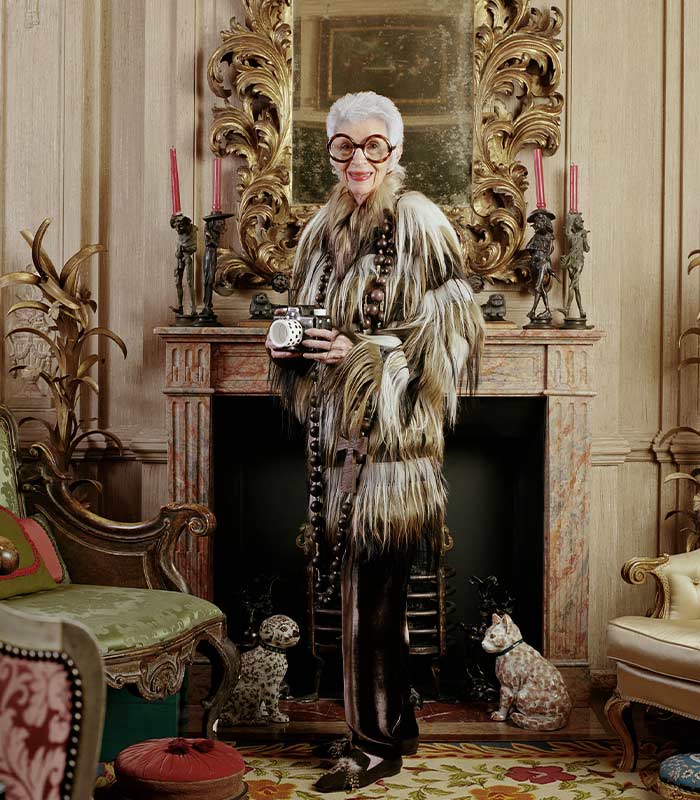 Iris Apfel is in the news so often these days that I thought it’s high time for us all to get to know her better and profile her on this site. She is a perfect example of how you can still be very active and hip at old age. It’s hard to believe that Iris Apfel is already 91 years old!

Born Iris Barrel in Astoria, Queens, New York, Apfel is the only child of Samuel Barrel, whose family owned a glass-and-mirror business, and his Russian-born wife, Sadye, who owned a fashion boutique. She studied art history at New York University and attended art school at the University of Wisconsin. As a young woman, Apfel worked for Women’s Wear Daily and for interior designer Elinor Johnson.

In 1948, she married Carl Apfel who is still her husband. Two years later they launched the textile firm Old World Weavers and ran it until they retired in 1992. During this time, she was involved with several design restoration projects, including work at the White House for nine presidents: Truman, Eisenhower, Nixon, Kennedy, Johnson, Carter, Reagan, and Clinton.

In 2005, the Metropolitan Museum of Art in New York City premiered an exhibition about Apfel titled Rara Avis (Rare Bird): The Irreverent Iris Apfel. Since then her star has only risen with her image being featured in Paper Magazine, Vogue and New York Times.

At the moment Apfel still consults and lectures about style and other fashion topics at he University of Texas where she was made a professor and is busy with several other projects: her Mac cosmetics line, her work for Eye-Bobs and Yoox. She will also be launching her own line of handbags shortly: Extinctions, which will be available in October this year and will include twelve pieces in five colours.

Here are some inspirational quotes of her that I encountered on the web: 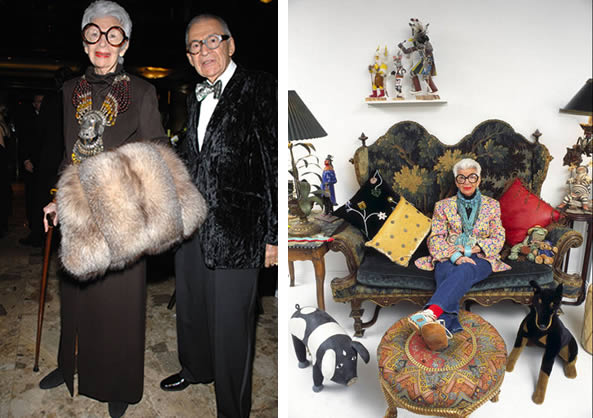 “In my view you can’t go to the future if you haven’t come from the past.”

“You learn as you grow up, if you’re intelligent – or even three-quarter witted – that there’s no free lunch. You pay for things in various ways. Living, loving, everything else is a matter of the same principles: you learn to work with what you have. And there’s nobody today who can’t do something to help herself.”

“Doing your own thing is very good,” Apfel concludes, “if you have a thing to do.”

On aging and beauty 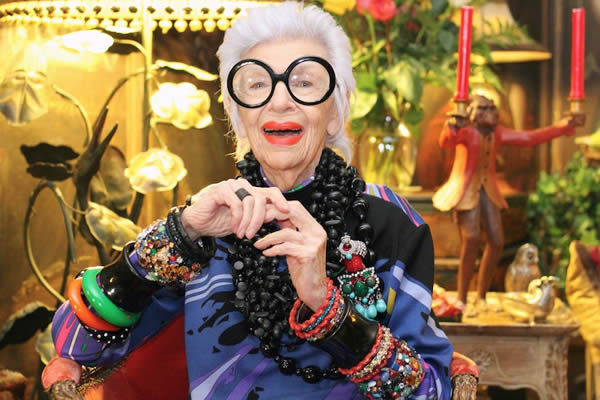 Photo by Into the Gloss

“Aging gracefully is about no heavy makeup, and not too much powder because it gets into the wrinkles, and you know, to not get turtle eyelids, and to not try to look young. You don’t have to look like an old fuddy-duddy, but I believe it was Chanel who said, ‘Nothing makes a woman look so old as trying desperately hard to look young’.

“If you can’t be pretty, you have to learn to make yourself attractive. I found that all the pretty girls I went to high school with came to middle age as frumps, because they just got by with their pretty faces, so they never developed anything. They never learned how to be interesting. But if you are bereft of certain things, you have to make up for them in certain ways. Don’t you think?”

“Getting older ain’t for sissies, I’ll tell you. It’s very funny. I have a dear friend whose mother’s gone, but she was very funny. When I’d say ‘Yuda, how do you feel?’ she’d say, ‘Oh—when I get up in the morning, everything I have two of, one hurts”.

“I like good, wholesome, well-prepared food. I don’t like glopped-up, I don’t eat cakes. Sometimes they say I don’t eat enough, but it’s better to eat less than more. I think more people get sick from over-eating all the wrong things. The body is like a machine—if you don’t put the right kind of fluids into it, it’s not going to work so well, or it’s going to get clogged up.”

“There’s a sad lack of glamour in the world today,” Apfel mourns. “And there’s absolutely no fantasy.”

“I think when I was very young, maybe in my teens, I was experimenting until I found what I thought I liked. Didn’t take too long. I don’t like trends anyway—I like tradition. I’m doing the same thing and liking the same things. Of course, to say I don’t change—that makes me sound like I’m a dimwit. You change as you go along. I mean, you grow—but my basic sensibility is the same.”

“I’m a hopeless romantic. I buy things because I fall in love with them. I never buy anything just because it’s valuable. My husband used to say I look at a piece of fabric and listen to the threads. It tells me a story. It sings me a song. I have to get a physical reaction when I buy something. A coup de foudre – a bolt of lightning. It’s fun to get knocked out that way!”

On her new bag line Extinsions: “I’m a colour person. I’ve never been known to play it safe. Plus I like big bags. My eyeglasses are so big they don’t fit into smaller bags.”

In the below video she shares more of her ideas about style and she talks about the company she ran with her husband for 44 years: M∙A∙C has recently presented a colour collection featuring lipsticks, beauty powder and eye shadows with as much flair and joie de vivre as Iris Apfel herself. The brand created four limited edition (and one permanent) shades of MAC Lipstick in the Iris Apfel collection.

“When MAC asked me to do a collection, I was thrilled and flattered. I never thought I’d be doing this; it’s like some sort of an insane, psychedelic dream. I worked with them and we picked colors, and I told them the kind of colors I liked—I like bright, intense colors. They showed me what they had and what they could do, and some of them were not quite heavy enough. I need a heavy—for me—a heavy matte lipstick. They were able to change the formulas. They went back and forth, and then we did eye shadows and nail polish, and a couple of other things—very exciting, very sexy. I loved it.”

Iris and the Jimmy Choo shoe

Iris inspired a shoe that carries her name: The Iris shoe by Jimmy Choo. Designer, Sandra Choi and Simon Holloway, took inspiration from her “maximalist style and bold layering of tribal and ethnic jewellery”. When asked what she thought about the shoe she exclaimed: “I’d never wear these!”, which is indeed quite unlikely, considering the immense heel. There is a lower version of the shoe as well, but that does not carry her name.

She earlier said about high heeled shoes: “Those big platforms and insanely high heels. They look like an orthopedist’s delight. I don’t see anything beautiful about them.”

How Iris is changing people’s lives

“People say: ‘You have inspired me, you’ve given me courage…’ They’ve gone so far as to say you’ve changed my life! And I would come back and say to my husband: ‘I can’t understand it – what kind of poor little life did she have if I had to come and change it?'” Her husband said she should ask. And sure enough, the next time someone said she’d changed her life, the fan was a 70-year-old lady in Florida. Apfel thanked her, then took her aside and said: “Would you mind very much explaining that to me?” So the woman did. She said that she’d never wanted to look just like everybody else, but she wasn’t sure how to do that without looking silly. Once she saw Apfel’s show, she knew, and what’s more, she said, “now that I’ve learned I don’t have to look like everybody else, I don’t have to think like everybody else”.

She is one inspiring woman for sure and a true style icon. Does Iris Apfel inspire you? In what way? 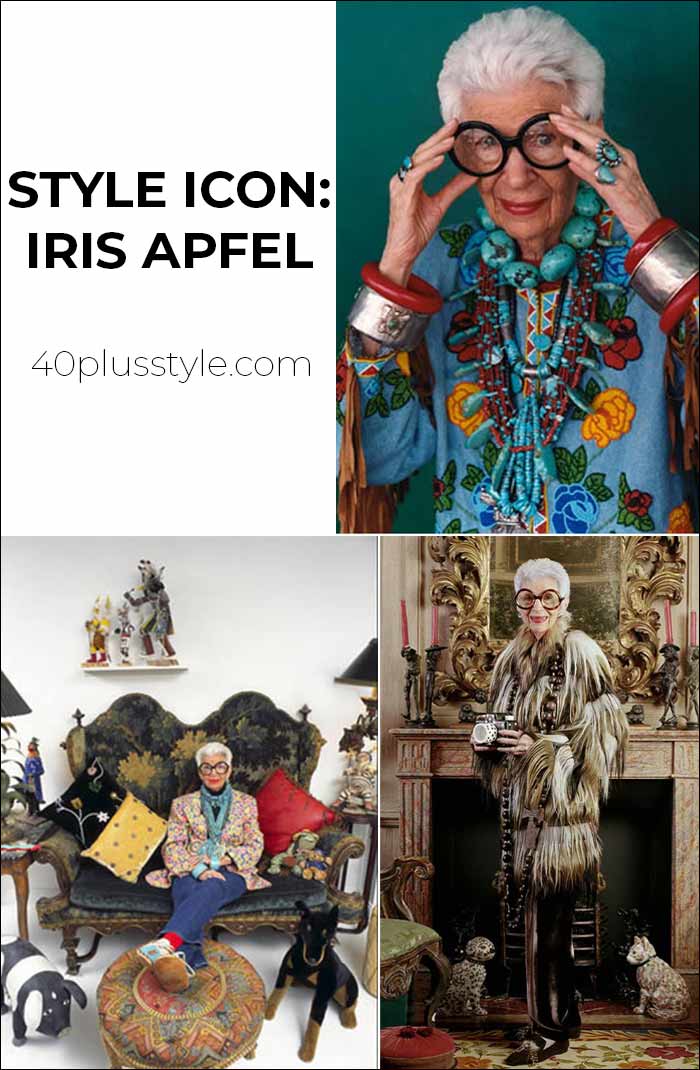 Sources: The Guardian, Telegraph, Into the Gloss, Wikipedia